The values for 2016 of the Public Indicator of Income of Multiple Effects (IPREM) and the Minimum Interprofessional Wage (SMI) are already known and again this year the IPREM is frozen, and the SMI rises slightly. 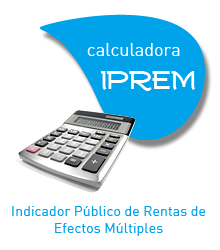 The IPREM is the Public Income Indicator of Multiple Effects and is considered a reference index for the calculation of income in many areas, while the Minimum Interprofessional Wage (SMI) is used in the strictly labor field.

The IPREM serves as a reference for any purpose other than the workplace, for example, the IPREM is used when applying for scholarships or housing grants, to establish fiscal limits, or in the calculation and access to social benefits. For the sixth consecutive year in 2016 the IPREM does not rise, while the SMI rises by 1% over the previous figure.

The amounts in force for these benchmarks in 2016 are:

In the minimum wage, only monetary remuneration is computed, without the salary in kind being able, in any case, to give rise to a reduction of that amount. This salary is understood to refer to the legal full-time working day. If a shorter working day were to be carried out, the amount would have to be prorated according to the time spent.