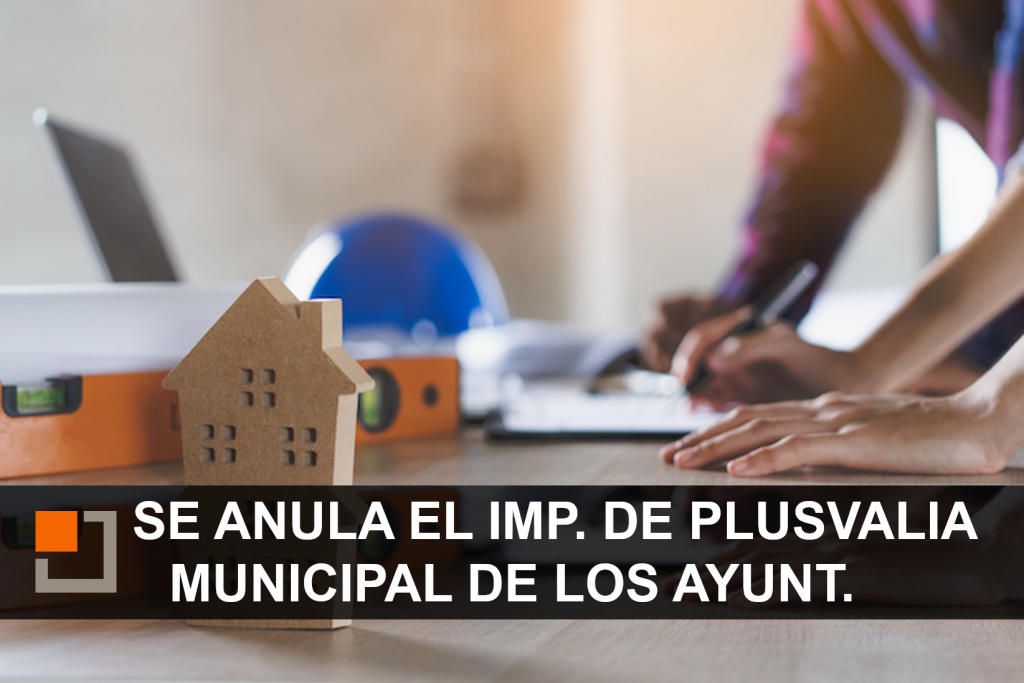 On Tuesday, October 26, 2021, the Constitutional Court annulled the municipal capital gains tax that until now the municipalities entered. The annulment is due to the system for calculating the taxable base of this tax is unconstitutional, directly affecting the principle of economic capacity contained in article 31 of the Spanish Constitution.

The annulment of the municipal capital gains tax is a strong threat to the finances of local administrations,since it was an important source of financing for the consistories of the whole country.

Why is the municipal capital gains tax cancelled?

The ruling of the Constitutional Court declares institutional and null and void three paragraphs of article 107 of the Law Regulating Local Finances,which regulate the calculation of the taxable base of the capital gains tax.

The reason is that the objective method for calculating the taxable amount of the tax increases the value of the land during the period of taxation,regardless of whether or not there has been such an increase, as well as the actual amount of that increase.

This means that the tax does not always respect the surplus value actually obtained,since it is based on tables pre-established by the municipalities and some scales prefixed by the regulations, without taking into account the real evolution of the value of the land on which the house is built.

What is the municipal capital gains tax and who pays it?

The municipal capital gains tax is really the tax on the increase in the value of urban land (IIVTNU), and it is a direct tax that depends on the municipalities, which are responsible for its management.

The capital gains tax is paid when the taxpayer sells, donates or inherits a home,and taxes the revaluation of the urban land on which the property is built from the moment of its purchase, until the transfer, regardless of whether it is by sale, inheritance or donation.

Therefore, it is the seller of the house who has to pay the tax,since it is the one who receives the money from the sale. On the other hand, if it is a donation, the person who takes the property is the one who has to take charge of the payment of the tax,and the same happens when a home is inherited.

How is the municipal capital gains tax calculated?

Regulated by the articles between 104 and 110 of the Law Regulating Local Finances, to calculate this tax the cadastral value of the house and the time elapsed from the time it is acquired, until it is sold or donated,as established in article 107 of the regulations, are taken into account.

To obtain the taxable base on which the tax will be applied, revaluation rates established by the municipalities are applied,which vary according to the years that the house has been owned, and range from a maximum of 3% for periods of up to 20 years, and 3.7% for periods of between one and five years.

When it has been determined, the tax rate set by the city council is applied on the taxable base,with a maximum of 30%. The resulting amount is the one that the taxpayer must pay as a capital gain.

As soon as the final judgment is published, the municipalities will not be able to collect the tax again, unless the Treasury provides a new formula to calculate the tax that adapts to the constitutional doctrine. In the meantime, the tax will be cancelled.

This means that at least, municipalities will lose three months of income,which is the period that is expected until the Government manages to update the rule.

If we take into account that in 2019, the 8,000 municipalities in Spain entered 2,501 million euros for the municipal surplus value, the cancellation will be a great setback for next year’s municipal budgets.

What to do if the municipal capital gains tax has already been paid?

If the municipal capital gains tax has already been paid, there is the possibility of claiming the money,taking into the corresponding resources.

Each municipality will have a different way to manage the claim,and experts say that, if the system is settlement, the deadline to make the appeal will be one month from when the tax is notified, while if it is self-assessment, the term could increase to four years.