Disciplinary power: when do the faults hidden from the company prescribe?

Aycelaborytax » Blog » Disciplinary power: when do the faults hidden from the company prescribe? 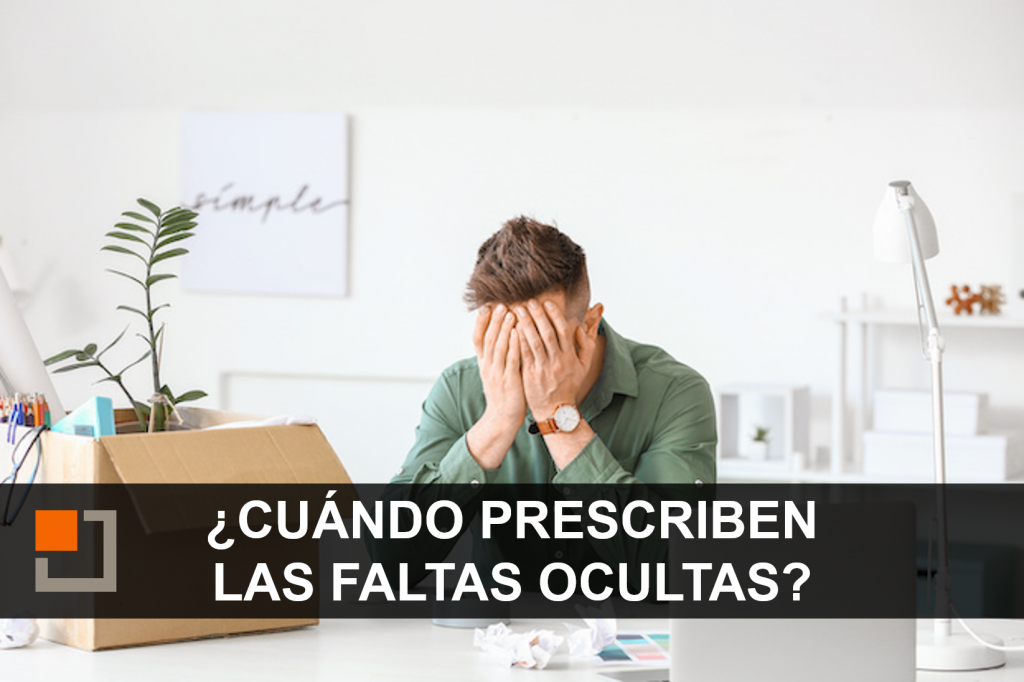 A worker provided services to a bank as a branch manager, until he received a disciplinary dismissal for breach of contractual good faith. The conduct alleged by the company in the dismissal letter consisted of the worker committing certain banking irregularities during the years 2015 and 2016.

The company informs the worker of the initiation of an investigation, in response to a questionnaire of 17-2-2017, and the worker acknowledges the culpability of the facts.

On 28-2-2017, a report of the instructor of the procedure addressed to the competent entity to sanction the faults committed by the worker is made, with which the investigation ends.

Finally, on 20-4-2017 the company notifies the dismissal to the worker for disciplinary reasons,through a dismissal letter dated 4-4-2017.

the worker files lawsuit against dismissal, which is declared inadmissible by the TSJ, both in the instance and in supplication, considering that, despite the fact that the alleged facts constitute a very serious misconduct, the faults imputed to the worker must be considered prescribed, since more than 60 days have passed, which is the limitation period of the very serious sanctions.

This is because, being continuous and hidden faults from the company, the pre-registration period begins from the time the last fault was committed,or since the company has full and exact knowledge of it.

The question to be debated is to determine whether the beginning of the limitation period should be computed from the recognition of the facts,or from the end of the sanctioning procedure through the instructor’s report.

To resolve this issue, the Supreme Court recalls its jurisprudence,in which the following criteria are applied:

a) In those cases of dismissals due to breach of contractual good faith or breach of trust, the date on which the term begins must be set on the day on which the company has full, full and accurate knowledge of them.

b) The full and exact knowledge is maintained or acquired by the company, when it reaches an organ of the same endowed with sanctioning powers.

c) When the punishable acts are committed by the worker fraudulently or with concealment, it is sufficient so that the prescription does not begin to be computed, that the position held by the offender obliges the surveillance and denunciation of the fault committed. Continuously enjoying a special trust of the company that serves to hide one’s own lack is a continuous lack of loyalty that prevents initiate the computation of the prescription.

e) The fact that the worker recognizes the facts investigated or imputed does not necessarily imply that there is already effective, real and certain business knowledge. As it occurs during the investigation, it does not determine that the body with the capacity to sanction has real and certain knowledge. The initial moment that allows the company to impose the sanctioning decision does not occur until the finalization of the report of the investigating body and its referral to the corresponding internal body.

Applying this doctrine,in the case prosecuted and, as regards the response to the questionnaire delivered at the investigation stage, did not imply or suppose in any way that the company had taken real, certain and effective news and knowledge of the fault or faults committed, the Supreme Courts determined that the labor infractions imputed in the dismissal letter had not expired.

For all these reasons, the appeal for the unification of doctrine raised is estimated, marrying and annulling the judgment of the TSJ appealed.

Dismissal of a worker who takes money without permission

Imagine that you have a shop where you check that a worker has taken money without permission, and returns it after a few days. By acting secretly, could you fire him?

If an employee steals money from the cash register and keeps it, the company can dismiss him in a disciplinary manner,with full validity regardless of the amount stolen. Due to the disloyalty of the worker, he incurs a serious and culpable transgression of contractual good faith, causing the loss of confidence on the part of the company.

If, on the other hand, the money does not stay, and returns it after a few days, it is also a cause for dismissal:

If the employee returns the money, since the employee has returned the money and the company has not suffered damages, it is best to impose a lower penalty,avoiding dismissal, since otherwise some judge might consider that the employee’s conduct is not serious enough. In this case, a sanction of employment and salary would suffice,warning the worker that in case of recidivism he will be dismissed.

Table on prescriptions and expiries of faults

On 1-3-2018 a worker commits an infraction, which according to the applicable agreement is considered minor and is punishable by a warning. The company has knowledge of the facts at the time they occur.

In the case of a serious or very serious infringement committed by an employee representative, an adversarial file is necessary to suspend the limitation period. However, in the case of minor infringements and a file is processed, but this does not interrupt the statute of limitations.

On 1-3-2018 a worker commits an infraction, which according to the applicable agreement is considered serious and is punishable by suspension of employment and salary for 10 days. Due to the circumstances in which the work is performed, the company has no knowledge of the facts at the time it occurs. The company knows the facts:

A hard-working shop steals from the cash register where she works small amounts of money. The conduct begins on 1-3-2018, and ends the behavior on 10-10-2018, knowing that the company was investigating the thefts.

As the worker has stopped committing the continued offense on 10-10-2018, the statute of limitations begins from that moment, despite the fact that the facts have begun to occur since 1-3-2018.

If the company knows the facts on 15-10-2018 and sanctions the worker on 17-10-2018. It is within the limitation periods and therefore, the company can sanction the worker.

A worker embezzlers in the company for which she works. The company is aware of the facts after an audit that exposes the crime. From that moment, when the facts are known, is when the limitation period begins.

Receive personalized advice for your company