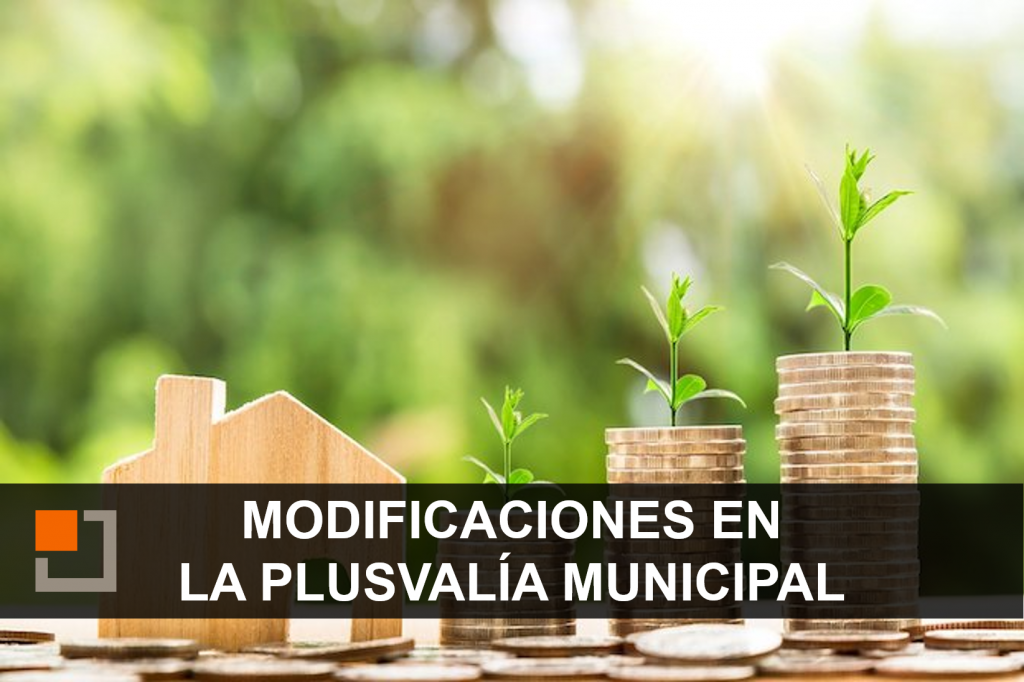 Last Tuesday, October 26, 2021, the Constitutional Court annulled the municipal capital gains tax,claiming that the system to calculate the taxable base of said tax was unconstitutional, which directly and seriously affected the income of the municipalities.

And, just two weeks later, the Council of Ministers has reactivated the municipal surplus value, introducing modifications in the legal regime of the Tax on the Increase in Value of Urban Land (IIVTNU), which are included in Royal Decree-Law 26/2021, of November 8, published on Tuesday, November 9, 2021 in the BOE.

A safeguard rule is published to prevent taxation for this tax from being contrary to the principle of economic capacity,and the following case of non-subjection is established in the new paragraph 5 of Article 104:

«5. There shall be no tax on transfers of land in respect of which

dates of transmission and acquisition.

To verify the absence of an increase in value, as the value of transfer or acquisition of the land, the greater of the following values will be taken in each case, without the expenses or taxes levied on such operations being computed for these purposes: the one that appears in the title that documents the operation or the verified one, where appropriate, by the tax authorities’.

On the basis that the system for calculating the tax base was the reason why this tax was suspended, now a new calculation method is introduced in the newly created article 104.5 of the TRLHL (Consolidated Text of the Law Regulating Local Finances), for the difference between the transfer and acquisition value.

The application of this calculation system is configured as established in article 107.5 of the TRLHL:

In this way, the system for calculating the taxable amount objectively becomes optional,and will only apply when the taxable person does not use the new method.

To introduce the possibility of graduation of municipalities, the second paragraph of Article 107 of the TRLHL undergoes an amendment:

‘2. The value of the land at the time of accrual shall result from the provisions of the following rules:

a) In the transfer of land, the value of these at the time of accrual will be the one determined at that time for the purposes of The Property Tax.

However, when this value is the result of a presentation of values that does not reflect planning modifications approved after the approval of the aforementioned presentation, this tax may be provisionally settled in accordance with it. In these cases, in the final settlement the value of the land will be applied once it has been obtained in accordance with the collective valuation procedures that are instructed, referring to the date of the accrual. When this date does not coincide with the effectiveness of the new cadastral values, these will be corrected by applying the corresponding update coefficients, established for this purpose in the general budget laws of the State.

When the land, even if it is of an urban nature or integrated into a real estate of characteristics Special, at the time of the accrual of the tax, does not have a certain cadastral value at that time, the city council may practice the liquidation when the aforementioned cadastral value is determined, referring to said value at the time of accrual.

The municipalities may establish in the tax ordinance a reduction coefficient on the value indicated in the previous paragraphs that weighs their degree of updating, with a maximum of 15 percent.

With the new modifications, the coefficient to be applied on the value of the land at the time of accrual that is graduated for each year changes, with a maximum regardless that will be approved by the Ministry of Finance in norm with legal rank each year:

The maximum coefficients will be updated every year based on a norm with legal status,with the possibility of making such an update through the general budget laws of the State.

For those cases in which, derived from the previous case of non-subjection, the fee to be paid is not determined, paragraph 4 is modified and a paragraph 8 is included in Article 110,being worded as follows:

«4. The municipalities are empowered to establish the system of self-assessment by the taxable person, which shall entail the payment of the quota resulting therein within the time limits laid down in paragraph 2 of this Article. With regard to such self-assessments, without prejudice to the powers of verification of the values declared by the interested party or the taxable person for the purposes of the provisions of articles 104.5 and 107.5, respectively, the corresponding municipality may only verify that they have been made through the correct application of the rules governing the tax, without values being attributed, bases or quotas different from those resulting from such rules.

In no case may the tax be levied under the self-assessment regime in the case referred to in article 107.2.a), third paragraph.

8. In accordance with the provisions of Article 8, the tax administrations of the Autonomous Communities and local authorities shall cooperate in the application of the tax and, in particular, in compliance with the provisions of Articles 104.5 and 107.5, and the corresponding agreements for the exchange of tax information and collaboration may be signed for this purpose’.

By amending paragraph 4 of Article 107 of the TRLHL, a taxation is also included for capital gains generated in a period of time of less than one year,prorating the coefficient applicable to the period of the year in which it is generated:

«4. The period of generation of the increase in value shall be the number of years during which the increase has become apparent.

In the cases of non-subjection, unless otherwise indicated by law, for the calculation of the period of generation of the increase in value revealed in a subsequent transfer of the land, the date of acquisition, for the purposes of the provisions of the previous paragraph, will be taken as the date of acquisition, the one in which the previous accrual of the tax occurred.

Those municipalities that have the Tax on the Increase in Value of Urban Land, will have to modify its tax ordinances and adapt them to the provisionsof said tax, within a period of six months from the entry into force of Royal Decree-Law 26/2012, of November 8.

The provisions of this Royal Decree-Lawwill be applicable until the entry into force, taking the maximum coefficients established in the new wording of article 107.4 of the consolidated text of the Regulatory Law of Local Finances to determine the taxable base of the tax.

The new modifications of the municipal capital gains tax are in force from November 10, 2021,just one day after their publication.

Receive personalized advice for your company