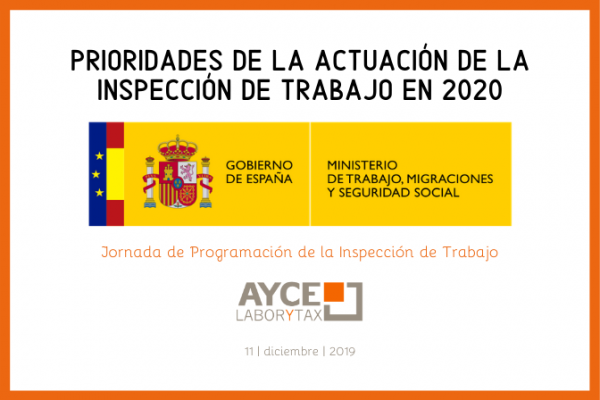 The main developments in the 2020 programming, in terms of the actions envisaged in the field of occupational risk prevention, will be mainly focused on increasing actions in the following sectors and aspects:

They will be specially designed for the control of:

In addition to these, other possible new impact actions under material safety conditions would be:

AREA OF INDUSTRIAL RELATIONS AND EMPLOYMENT

In this area, developments would be mainly focused on equality plans, wage registration and compulsory time registration.

The Royal Decree – Law 6/2019 of 1 March 2019has as urgent measures the guarantee of equal treatment and opportunities between women and men in employment, and occupation.

* Diagnosis
: The obligation established in Organic Law 3/2007 reaches very few workers, since it is only applicable to companies with more than 250 workers.

* Objective
: The largest number of companies and workers are intended to be obliged to negotiate equality plans and implement them. In addition to greater control of these plans by requiring their registration.

The threshold for working persons in enterprises who must necessarily develop and implement an equality plan is lowered from more than 250 to 50 or more. 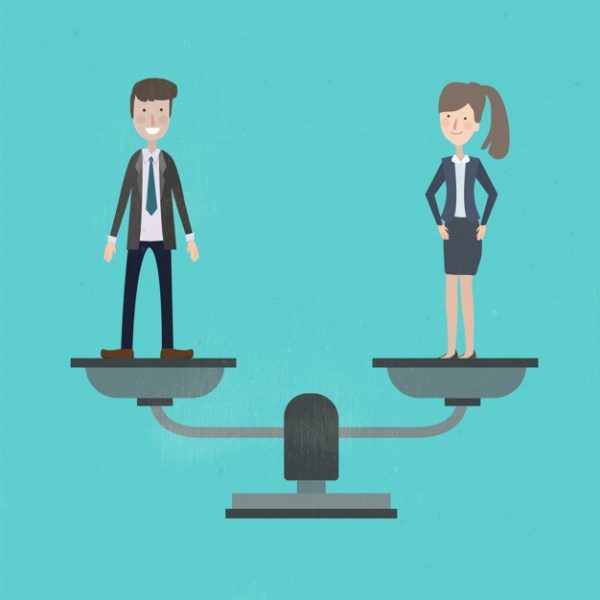 A transitional period has been

established since 7 March 2019 (new tran. 12a LOIMH) depending on the number of workers in enterprises:

As regards the content of the same, in the face of the regulation so far in force, where the subjects to be contemplated by the equality plans were not determined, listing only for example, those that could be included, now mandatory

minimum content, after negotiated diagnosis , where appropriate, with the legal representation of working persons, adding to the preceding list a global reference “working conditions” that expressly includes wage audits, as well as the co-responsible exercise of conciliation rights and female underrepresentation.

The preparation of this pre-negotiated diagnosis will be made within the Negotiating Committee of the Equality Plan, with a view to the company address the

obligation to provide all data and information necessary for the preparation of both the subjects listed and the data of the Registry regulated in the newly drafted Article 28 ET.

The diagnosis, content, subjects, wage audits, monitoring and evaluation systems for equality plans will be developed. 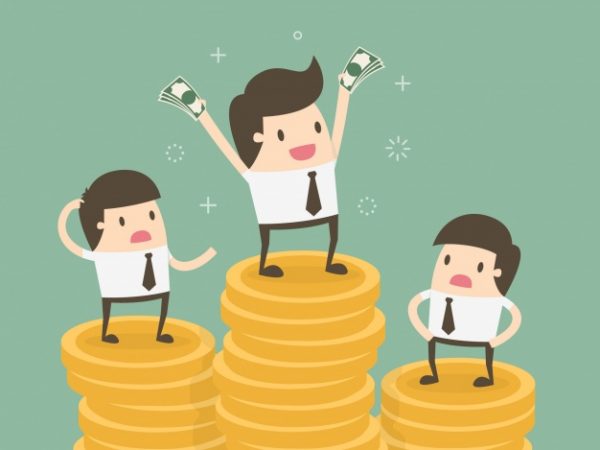 The obligation of every employer is established (regardless of the number of workers they occupy)
to keep track of the salaries of their workforce
by indicating average values of wages, salary supplements and extra-industrial perceptions, disaggregated by sex and distributed by professional groups, professional categories or jobs equal to or of equal value.

The right of access to such registration by working persons through their representatives is also included (art. 28.2 ET).

For companies with at least 50 working people, when the average pay (taking the whole of the wage mass or the average of the perceptions met) of female workers of one sex is greater than those of the other by 25% or more, establishes the
obligation
for the employer to include in the aforementioned wage registration a justification that this difference does not respond to grounds relating to the sex of working persons (art. 28.3 ET).

The Inspection’s action will place particular emphasis on: Intensifying control actions on procurement. 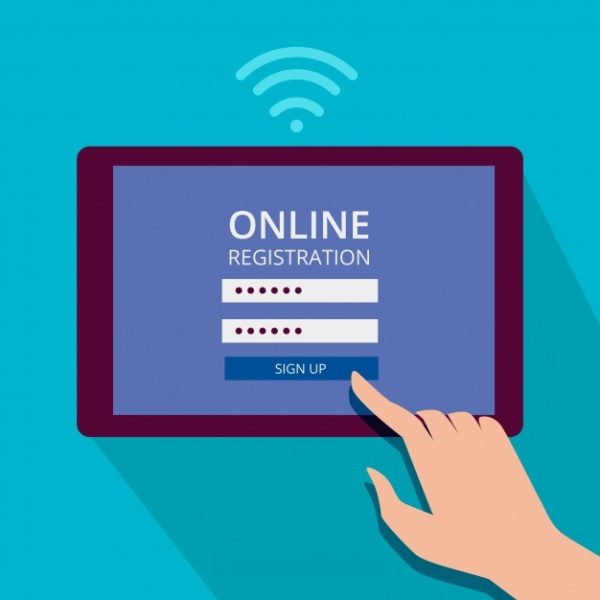 One of the aspects that has caused the most controversy since its approval has been the obligation to record the working persons’ day, extending this obligation to full-time workers.

In this sense, below we would like to comment on some recent statements, related to the Mandatory Day Registration:

The defendant company has a time control and registration system installed,through which the incorporation and exit of the workers’ job is verified.

Being a common practice in the company, deduct on the payroll each month the part corresponding to the minutes of delay that the worker may have incurred when joining it.

The company alleges that workers they are not allowed to compensate for such delays for other periods of work, where the day of the Convention is ANNUAL, constituting the contested practice a genuine fine to have, also resulting in that the company, in addition to deducting wages, proceeds to discipline workers who incur failures of punctuality, which has been punished by the Labour Inspection.

The business practice that is challenged, in no way does it entail the imposition of a fine of having, since where there is no effective provision of services by the worker, no wages are accrued beyond the cases provided for by law or conventionally (paid leave or leave (art. 37 and 38 E.T),or lack of effective occupation attributable to the employer (art. 30 E.T.).

The company when sanctioning either with warnings is either suspensions of employment and pay, or with dismissals, absences and delays of workers, while detraating from their wages those who would have accrued if there had been an effective provision of services, it does not entail a double sanction, since the de-wage de-traction is due to the logical dynamic development of a contract of a bilateral and synalagmatic nature such as that of work as above has been exposed without implying the exercise of any disciplinary power, while the sanctions mentioned above are due to the legitimate exercise of the disciplinary power provided for legally and conventionally.

Judgment of the High Court of Justice of the Canary

The worker states in his application that his usual working hours were from 7:30 to 13 and from 15 to 18:30 from Monday to Friday and from 9 to 13 hours on Saturdays, understanding that he therefore made 49 hours per week, claiming payment of overtime made in 48 working weeks of the calendar year stating that he was the only worker in charge of the closure of the hardware store.

The company denies the facts and claims that it has a work calendar in the workplace that collects a regular day.

The company has not recorded the day.

F.D 9o: The defendant company does not keep any time control of its workers, but testified at the request of the actor to demonstrate what his actual and usual working hours were. Witness evidence that it is not usually as blunt as a documentary, but that it is perfectly valid and effective, especially when the company, by not carrying out any time control, has deprived the plaintiff of accreditation of its claims by other, more robust means of proof.

“The requirement to concrete and then prove,
day by day and hour per hour,
the overtime performed when appropriate is when such overtime is
sporadic or unfixed.
“

, then the plaintiff who intends to claim overtime what he has to do is, first, to make clear in his demand that normal schedule (which determines the realization of a “normal” day above the maximum allowed) and the period of time in which he made it, and then in court prove that he actually made that schedule and day on a regular basis in the period claimed.

After this test, determining how many overtimes have been performed becomes a simple arithmetic operation, consisting of multiplying the number of hours performed in excess of the day (per day, per week or per month, according to the form of computation used) by the period of time to which the claim extends.

Then it is up to the companyto accredit that usual schedule above the day, to prove that, despite it, in reality, no overtime was done, or they are not due, providing for example daily time registration, accreditation that the plaintiff was made up for the excess hours worked with breaks or that he simply did not work in all or part of that period, or that overtime was paid.

In her complaint to the Inspection, the employee revealed that the entire team of the hyper worked longer days than legally permitted (in fact, they rested only on Sundays), without their employers giving them the excess of the day; nor did they trade on Social Security. They were also forced to sign fake work quadrants, in which breaks appeared that they did not enjoy. Although they signed in and out, the company used a computer program to modify the time log. Finally, in many days they were forced to take shifts of between 10 and 11 hours.

“In the present case, sufficient evidence of the infringement of the right to effective judicial protection has been established, in its case of guarantee of indemnity, therefore, with the application of Article 181.2 of the LRJS, it is for the defendant company to establish that the dismissal is due to different causes and such evidence has not been established, max if no contractual breach is made in the dismissal letter, the provision underpinning extinction is not indicated, since it is referred only to loss of confidence because of discrepancies in the way the work is carried out, which is closely related to the length of the working day reported by the worker and found by the“.

Through Collaboration Agreements with Social Security, control campaigns will be planned in various areas:

These are the indications that there is an employment relationship between the company and the self-employed:

> Justification for travel expenses in transport

Order of 4 July 2018 (rec. 2097/2018) on the question of who is burdened with proving the reality of travel and maintenance and stay costs in restaurants and hotels and other hospitality establishments, whether to the employer or employee. Interpretation of Article 9 of the RIRPF.

Technical Criterion 41/2005 understands that no justification of any amount will be necessary, provided that the day, place, reason or reason for the travelis established, in accordance with the legal presumption that if the travel has been made – in the legally envisaged terms – the expenditure has occurred.

* All these developments have been developed prior to the formation of the new Government of Spain (January/2020). Any changes to this from the date of such training will not be reflected in this summary.