Unfair competition, worker who sets up his company and competes with the company in which he provided his services

Aycelaborytax » Blog » Unfair competition, worker who sets up his company and competes with the company in which he provided his services

The common situation of a worker who creates his own company and competes with the society in which he provided his services, taking advantage of the knowledge of this can be considered to exercise unfair competition in some cases that should not be confused with the struggle for clientele that is lawful in a system of free competition.

There are not isolated cases where a worker with extensive experience and knowledge in a company, decides to disassociate himself from it and set up a new professional project, through a company with the same commercial activity as the company in which he provided his services, and knowing how he knows, the processes, prices, customer contacts, you can easily offer the clients of your old company the same services at more adjusted prices, causing this first company economic damages difficult to solve, and that analyzed in detail the actions in some cases we may be facing cases of unfair competition prohibited by our legal system.

Unfair competition activities are those that are described in article 5 of the Unfair Competition Law (LCD), which defines as unfair any conduct that contains false information or information that, although truthful, by its content or presentation induces or may mislead the recipients, being susceptible to alter their economic behavior, whenever it affects any of the following aspects:

Likewise, when the company is bound by a code of conduct, non-compliance with this code is considered unfair, provided that the conduct causes a significant distortion in economic behavior.

Existence of deception in order to undermine the reputation of the rival. 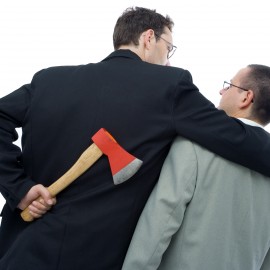 As the main presposition to understand disloyalty, it is necessary that the conduct derives a deception, that although it is not effectively carried out, just by proving the fact of the possibility of exercising the deception there would already be unfair conduct, in such a way that it can affect the behavior of consumers that diminishes their ability to fully know the matter and that does not allow to make a decision with full knowledge of the facts, so that this knowledge is such that if it did not exist, the decision would not be made to contract that product or acquire that service.

In this way there could be deception if services are offered comparing these with those of another company, so that it is understood that some services are better by a series of allegations that undermine the credit of the rival, and it is shown that they are completely false, and that whose sole purpose was to tip the balance of trade by exercising unfair conduct. These allegations must be false, since otherwise if it were proven that they are accurate, true or relevant, disloyalty cannot be understood, as provided for in Article 9 of the LCD.

In reference to this matter, the Judgment of the Supreme Court of July 11, 2006, understands that those acts that suppose an attack on the reputation of the third party and that are carried out with concurrence purpose are unfair; these elements must be presented in them: (a) impairment of the reputation and credit of the third party on the market; (b) falsehood; (c) which are relevant; d) that have a concurrent purpose.

There must be a spread of false afrimations against a rival, knowingly, and in order to harm him commercially, to bring him into disrepute before a third party or his product, in such a way as to influence the laws of supply and demand by hindering competition by manipulating consumer decisions.

Existence of illegitimate exploitation of information or knowledge that violates the principle of industrial or business secrecy.

To understand that there is unfair competition, there must be disclosure, or exploitation without authorization, of industrial or business secrets that have been legitimately accessed, but with a duty of reservation or illegitimately through espionage or similar procedure (article 13 LCD), defining the Judgment of the AP of Madrid of October 15, 2010 that industrial or business secrets are understood as the set of information or knowledge that does not are in the public domain and are necessary for the manufacture or marketing of a product, for the production or provision of a service or for the organization and financing of a company, and must meet the following requirements: (1) it is not generally known or easily accessible to persons entered into the circles in which the type of information in question is normally used; (2) which has commercial value because it is secret; and (3) it has been the subject of reasonable measures, having regard to the circumstances, to keep it secret, taken by the person who legitimately controls it.

An assumption that could be considered an act of exploitation of industrial secrets would be to prove that the new company has seized the software of the rival company, to exploit and market it as its own.

Attracting the clientele of the company where we previously worked.

The possibility of incurring in a case of unfair competition due to the appropriation of the client portfolio that the previous company had has its limitation, according to our doctrine in which the struggle to attract customers is lawful and desirable, for reasons of economic efficiency, in a system of free competition, no one being able to invoke any title with respect to it, nor to claim an effective loyalty when the means used are lawful. Disloyalty must derive from the means used or ends pursued, taking into account the principle of competition for one’s own effort or for efficiency of merits, SAP Barcelona of 12 February 2009, STS of 3 July 2008, STS of 23 May 2007.

Therefore, although the clientele supposes a very important economic value for the company, it is possible to use the mechanisms of legitimate effort and efficiency to take it from the competitor, within a system of free economic initiative and entrepreneurial freedom.

However, in return, it is understood that there is unfair competition for the illegality or illegality of attracting customers when it occurs, for example, before the termination of the employment relationship with the first company and that thanks to this recruitment it is subsequently decided to create a new company offering those customers the same services as in the previous company. On the latter sense there are various STS Judgments of 3 July 2008, STS of 8 June 2009, STS of 16 June 2009, STS of 1 June 2010 and SAP of Madrid 10227/2013.