The Public Treasury foresees for 2016 a net issuance of 45,000 million euros, a figure 9.1% lower than that foreseen in the General State Budgets for next year. Of this amount, most (41,000 million) will be long-term issues and the rest will be Treasury Bills.

For the year as a whole, net issuance was also lower than expected at the beginning of the year, with the lowest outstanding debt and issuance costs in history and an extension of the average life. Specifically, net issuance stood at 47,717 million euros, 7,283 million less than initially expected. Debt held by non-residents accounts for 53.5% of the total.

This progressive reduction in the public deficit allows a better performance of the market in recent years, from the peaks reached in 2012. In 2015, the Net Treasury issue stood at 47,717 million euros, half of that carried out four years ago. The €45 billion planned for 2016 represents an additional reduction of 5.7%. Gross issuance is also reduced in these years. It went from 236,817 million euros at the end of 2015, to the 226,694 million expected for 2016. In the coming year, most of the net issuance will focus on the long term (41,000 million), and if maturities are included, the distribution will be 125,301 million in the medium and long term and 101,393 in Treasury Bills. 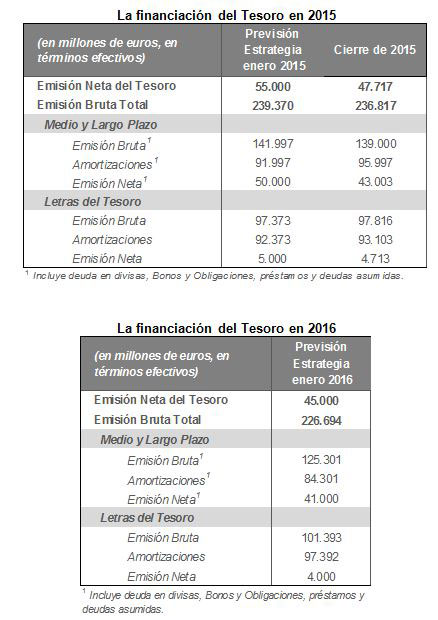 Most of the 236,817 million gross financing in 2015 has been obtained in 48 auctions, 24 of Government Bonds and Obligations and 24 of Treasury Bills. The remainder of the broadcasting programme has been covered by four syndicates of State Obligations.

The auctions have enjoyed good demand, as reflected in the high coverage ratios, 2.27 on average in the auctions of Bonds and Debentures and 2.42 in those of Letters.

The holdings of non-segregated Government Debt held by non-resident investors stood at the end of November 2015, the latest available data, at 418,738 million euros, 53.5% of the total registered portfolio. This contrasts with the minimum recorded in 2012, the year in which the portfolio registered in the hands of non-resident investors stood at 191,836 million euros.

The emission schedule for 2016 is as follows: 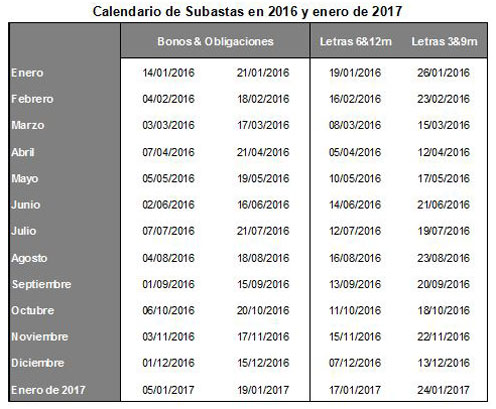 The bulk of the program will be implemented through the holding of ordinary auctions of Government Bonds and Obligations and Treasury Bills. Occasionally, alternative methods of issuance may be used, such as bank syndications, private placements or special auctions.