New Form 232: Know the changes in the declaration of related transactions and with tax havens Deadline for filing: November 30

Aycelaborytax » Blog » New Form 232: Know the changes in the declaration of related transactions and with tax havens Deadline for filing: November 30

Last August, Order HFP/816/2017 was published in the BOE, for taxpayers with operations related to and related to tax havens. Under this standard he created the Form 232 of informative declaration. In today’s article we will elaborate on the changes that have occurred in this statement.

Treasury Form 232: What is it? Fundamental concepts

The form 232 of the Treasury is a declaration by which, some taxpayers must report to the Tax Agency of certain related operations and situations related to countries or territories called “tax havens”.

This presentation must include all related information about those tax periods that began on or after January 1, 2016.

This information until 2015 was presented through Form 200 of Corporation Tax,within the section for related transactions and operations with tax havens.

To know who is required to submit this model, it is necessary to understand what is a related person or entity and what is a tax haven.

They are those mentioned in article 18.2 of the Corporate Tax Law Law 27/2014 of November 27. The following persons or entities are included as linked:

So that there are no doubts, we suggest you review the aforementioned article of the Corporate Tax Law, in the following link.

We must understand which are territories or countries that for Spain constitute “tax haven”, forthe purposes of the presentation of the model of linked transactions.

To do this, a first approach would be to go to the countries and territories mentioned in Royal Decree 1080/1991. There are, among many others: Gibraltar, British Virgin Islands, Seychelles or Isle of Man.

Seeing all the complexity and the innumerable doubts that the presentation of Form 232 can entail, in AYCE LABORYTAX we put at your disposal a complete questionnaire to analyze the possible operations forced to declare.

Basically the persons obliged to declare form 232 are the taxpayers of the Corporation Tax,taxpayers of the Income Tax of Non-Residents (IRNR) with permanent establishment in Spain, and all entities under the regime of attribution of income constituted abroad with presence in Spanish territory, when the aforementioned carry out some of the operations included.

Cases EXCLUDED from the obligation to file Form 232

What information should be included in Form 232?

It will be necessary to include information on both the income and payment operations, separately and without compensation between them. Transactions shall be grouped by the different types, provided that the same valuation method has been used. If different methods have been used, the information will also have to be offered in different lines.

What are the operations in question?

A. WITH REGARD TO RELATED PARTY TRANSACTIONS

A differentiation is made. In the first place, related persons or entities that carry out the following operations are obliged to present them: 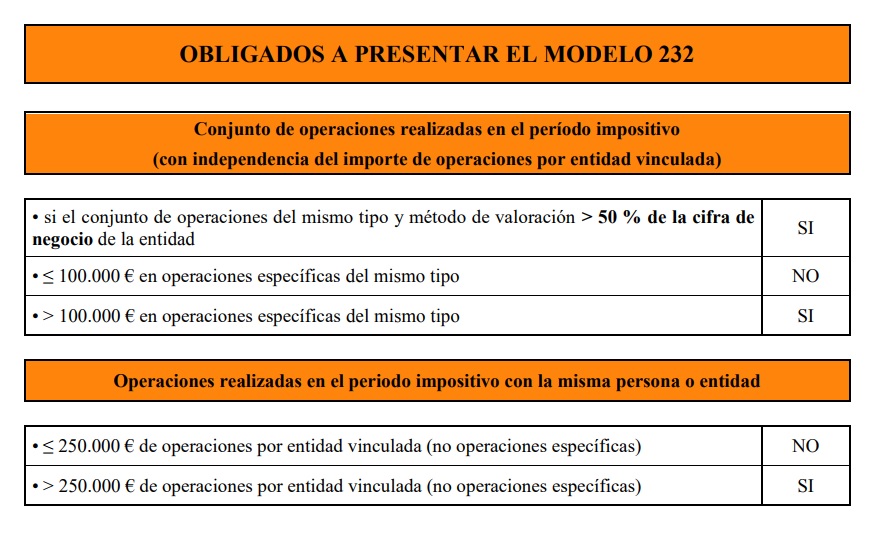 B. REGARDING TAX HAVENS

On the other hand, entitiesare also obliged to submit form 232 to the Tax Agency:

What’s New in the Declaration of Linked Transactions: The Changes Introduced by Form 232

The information that is now presented through Form 232 was that which previously referred to transactions linked to Corporation Tax, and which was part of Model 200.

The recent rule has expanded the cases of operations that must be reported, which implies, from the point of view of the taxpayer, a greater complexity and a greater duty of attention when submitting information to the Tax Agency.

Deadline for submission of the new Form 232

The deadline for submission,as a general rule, is within the month following the ten months after the end of the tax period that corresponds to report, being November 30, 2017 the last day for those who started from January 2016.

Taxpayers who close their financial year on December 31 will have the opportunity to submit the information throughout the month of November of the following year.

We hope you found this article useful and, if you have any questions, remember that you can always contact one of our tax advisors.